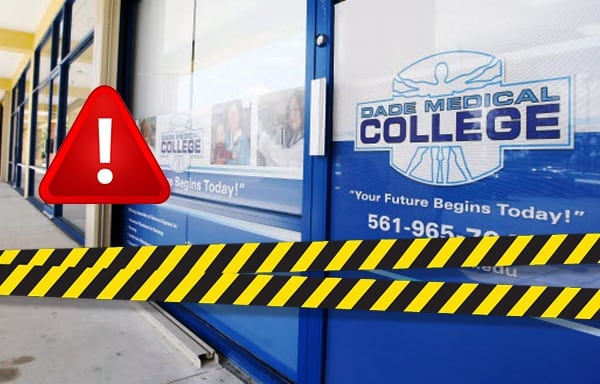 Dade Medical College Students were blindsided last Friday when the for-profit school announced it would be closing its doors on Friday.

When did the discontinuation go into effect?

Students and faculty had mere hours before they had to figure out what they were going to do next. Ernesto Perez, the majority owner of Dade Medical College sent out a memo informing student and staff that by the end of the day their college would be closing its doors.

According to the Miami Herald, Perez is under “federal scrutiny and mounting debts” and just couldn’t afford to keep the college running.

He waited until the very last second to tell the students attending Dade Medical of the issue and his decision to close the school that very day.

All six of the Dade Medical Colleges will be closing running from Homestead to Jacksonville including the University of Southernmost Florida (USmF), an affiliate university of Dade Medical.

There is a class action lawsuit already pending against Ernesto Perez, who also turned himself into the courts last night for other pending charges. But this lawsuit is for the employees.

What about the students?

Students who were attending Dade Medical College and its affiliate school University of Southernmost Florida have gathered outside of the campuses demanding answers but getting little to no response.

Lower your payment or qualify for Student Loan Forgiveness Today

One main concern of students is for the student loan debt they have accrued while attending the college.

One nursing student claiming to have an abundance of over $50,000 in student loan debt and now no degree to show for all her hard work- not even a college to show for her work anymore.

Like the other shut down for-profit schools the student loan community has seen this past year or two, many Dade Medical and Univ. of Southernmost Florida will be stuck with this debt unless they can get it discharged by the DOE. However with so many already pending discharge cases against schools with the DOE, it is likely these students may never see that day come or may have to wait years to even have their case looked at.

That is why Dade Medical College and University of Southernmost Florida need to discover all of their options for their student loans.

There are several options available to students who have been affected by the closing of Dade Medical College. These options include government programs that help with the repayment of federal student loans and may include a lower student loan payment or even student loan forgiveness.

Discover your options for the repayment or forgiveness of student loans here or contact a student loan counselor at 877.433.7501.

Previous article: Shedding Light On Corinthian College Loan Forgiveness
Next Post: One Important Way Student Loans Can Save You Money