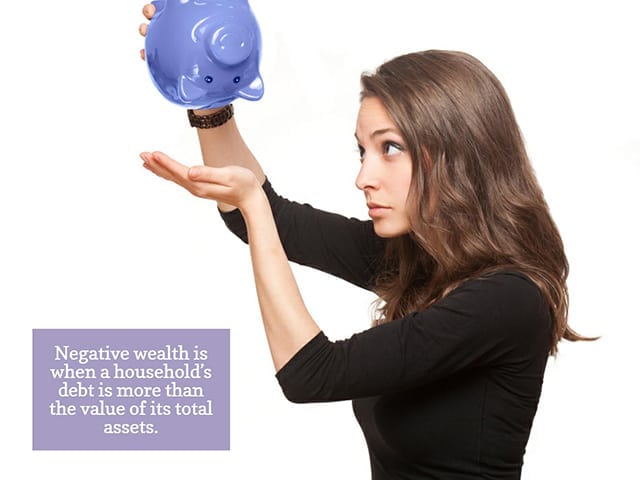 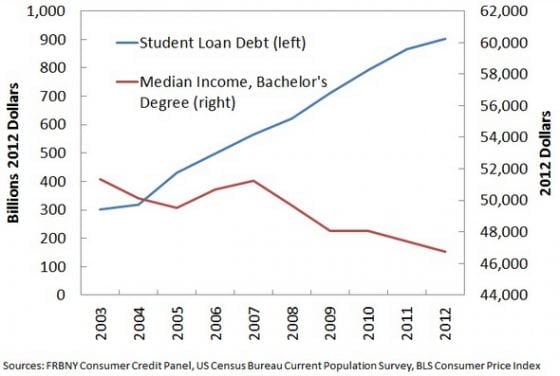 Not only is it increasingly difficult to pay them back, but, according to the Federal Reserve Bank of New York, it is adding to negative wealth for students who have graduated.

It is a well-known fact that having student debt at any age is incredibly common these days, but did you know that it accounts for nearly half of the total debt of current households?

Furthermore, student loans make up approximately 47 percent of the total debt of households with between $47,500 and $52,000 in negative wealth.

For households with between $12,500 and $46,300 in negative wealth, college loans made up about 40 percent of the total household debt.

In homes with the smallest amounts of negative wealth, most of the debt they carried was because of credit cards.

The analysis is based on a 2015 special module on household finance from the Survey of Consumer Expectations, which includes data on respondents’ assets, debt, and expectations from 1,300 respondents.

About 15 percent of U.S. households have total wealth at or below zero, according to a blog post describing the findings.

Demographic data on homes with negative money caused from student loans show that they are: 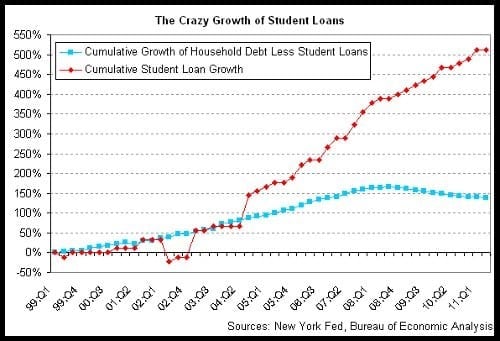 There is a high chance that the professionals that conducted this research found that the students with the most negative wealth used their debt to finance their future, and depended on the hope that they would soon attain a higher income, and be able to start paying off their student loans.

It was also found that households with negative wealth spend less money and have restricted credit, because of their student debt.

It is apparent that this cycle won’t be stopping anytime soon.

It is now understood more than ever that student debt is significant in understanding negative household wealth.

The creators of this study said, “It is very likely that the steady growth in student debt and borrowing from private loan institutions, paired with the very slow rate of student loan repayment we have documented elsewhere, has materially contributed and will continue to contribute to negative household wealth and wealth inequality.”

However, Seton Hall University’s Robert Kelchen, who studies issues and trends related to student financial aid and debt, said that conclusion might be too radical.

“It’s hard to draw that conclusion from this very new data,” said Kelchen, an assistant professor of higher education.

Kelchen said student loan debt is driving inequality among one primary group of students — those who drop out of college without completing a degree in any major.

However, he said many of the households with negative wealth include student borrowers who took out student loan debt to pay for graduate school and other various professional degrees.

That group of student debt holders will do well overall, Kelchen said.

It has been observed that students who don’t finish their degree path will most likely end up with negative wealth.

This trend has been gaining attention for the year among the higher education policy makers.

Additionally, recent research suggests that while student loan debt may have little effect on home ownership for those in high-earning jobs, it can have adverse consequences for those who do not finish a degree.

Another financial aid expert, Mark Kantrowitz, publisher and vice president for strategy at Cappex, put in his two cents on the matter as well by saying, most students graduate college with an affordable amount of debt, and it’s natural for them to have negative wealth immediately after graduation.

“The central question that we need to focus on is how does that progress over time,” he said.

Kantrowitz said when people have to devote a substantial amount of their income to paying off student debt; it means they’re less capable of these main things:

But he also pointed out the alternative scenario, where those individuals don’t take out loans, has to be considered as well.

He left us with another interesting question to ponder: “Would these people have been able to obtain a college education had they not borrowed?” he said. “And where would their net worth be if they hadn’t taken on this debt because they hadn’t gone to college?”