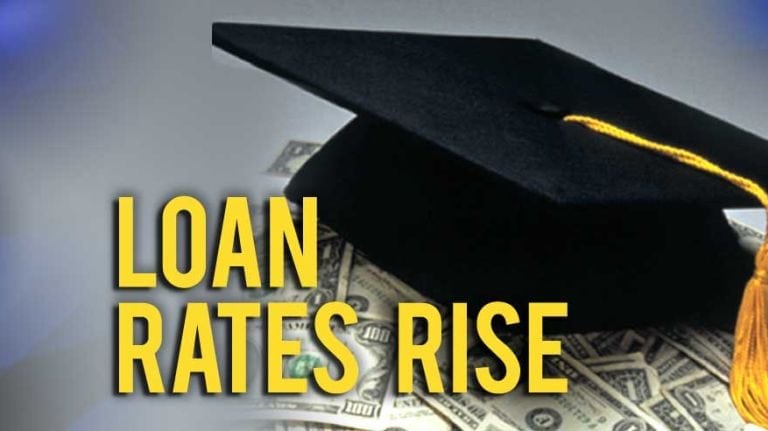 Student loan interest rates are going up! At least according to the Consumer Financial Protection Bureau.

CFPB Student Loan Ombudsman Rohit Chopra published an explanation on what to expect from the rates increasing, with the good intention of helping borrowers better calculate the costs of their higher education.

Although nobody can predict how much the interest rates will rise, it is pretty clear when the law passed last year that rates would only get higher as time went on.

Interest rates on student loans differ by the type of loan: Direct subsidized and unsubsidized loans for undergraduates have 3.86% interest rates through June; the Direct unsubsidized loan rate for graduate- or professional-degree students are 5.41%; and Direct PLUS loans for parents and graduate/professional students have a 6.41% rate. The CFPB projects those rates will rise to 5.09%, 6.64% and 7.64%, and they have a ways to go before hitting their caps at 8.25%, 9.5% and 10.5%, respectively.

But do not get all anxious about this estimates spike in interest rates. Sadly, there is nothing anyone can do about it, and choosing private loans over federal ones is usually not a good idea.

Federal loans offer more flexibility that many young college students can appreciate when starting out. Although many would argue that the terms of some of the loans are not flexible enough. But still, there are several loan repayment options and forgiveness programs that can lower your monthly payments if you find yourself struggling to repay those student loans, or if you happen to be employed in a certain field, like public service, you can get your loans forgiven and not be taxed for it.

Federal loan interest rates are fixed, meaning your payments won’t change, but many private student loans have variable interest rates. Those rates may be low when you borrow the money, but they can be much higher (and volatile) during repayment.

Given the little control consumers have over student loans, the best thing borrowers can do is make sure they’re only taking on what they need and can afford. That may mean working to find other scholarships and forms of financial aid or choosing to attend a less expensive school. Generally, it’s a good idea to graduate with a debt load that doesn’t exceed the starting salary for your chosen profession.

Higher interest rates mean you’ll pay more over time, and it’s incredibly important to stay on top of your education expenses. Student loans are practically impossible to discharge in bankruptcy, and for many people student loans are some of the first trade lines on their credit reports. A student loan delinquency could seriously hurt your credit, making post-graduate finances even more challenging.

Federal student loan interest rates aren’t based on your credit score, but they will impact your credit as you repay them.