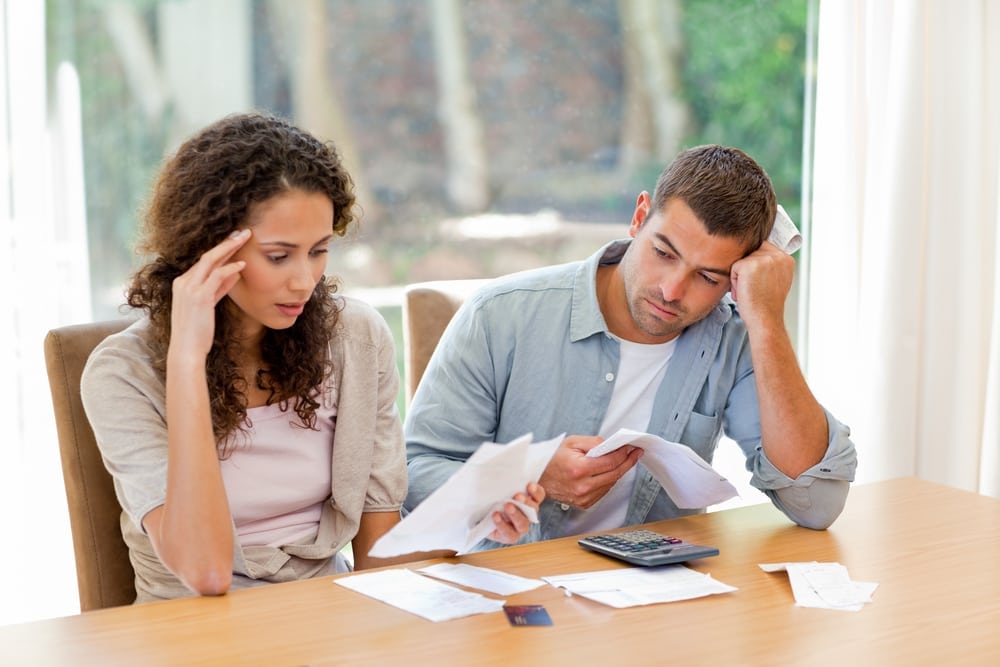 Many people believe that having student debt blocks them from purchasing a new home.

Student debt may be the cause of stress and anxiety for many people, but it does not provide as big of an obstacle to buying a home as many believe.

The Federal Reserve released information on July 8th showing that in the past ten years’ American student debt has reached over 1.3 trillion dollars.

On the other hand, home ownership in the United States is at around 63.5 percent.

The data from the Commerce Department is shown below: 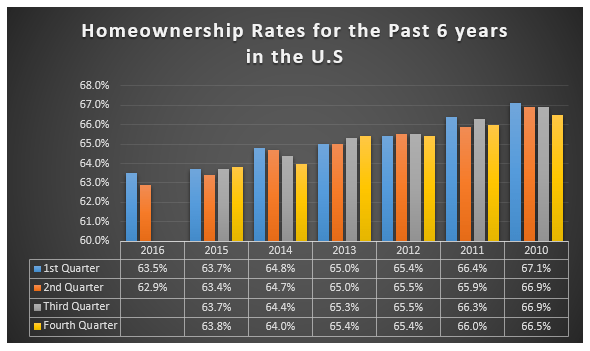 Recent research suggests that, even when an individual has student debt, a college degree increases a person’s likelihood of owning a home.

This study found that on an average basis:

The study that was conducted by Fannie Mae shows that home ownership rates that are hindered by student debt tend to affect particular groups of people on a higher level than others.

In the study, 3,000 consumers responded to make up the nationally representative sample group.

The study was conducted during 2015 in the third quarter.

The process was carried out through surveys over the phone every month.

1,000 respondents were contacted once a month.

Each of these respondents were then asked more than one hundred questions each.

The questions were aimed at addressing a broad range of topics.

Here is a picture to illustrate how the study worked: 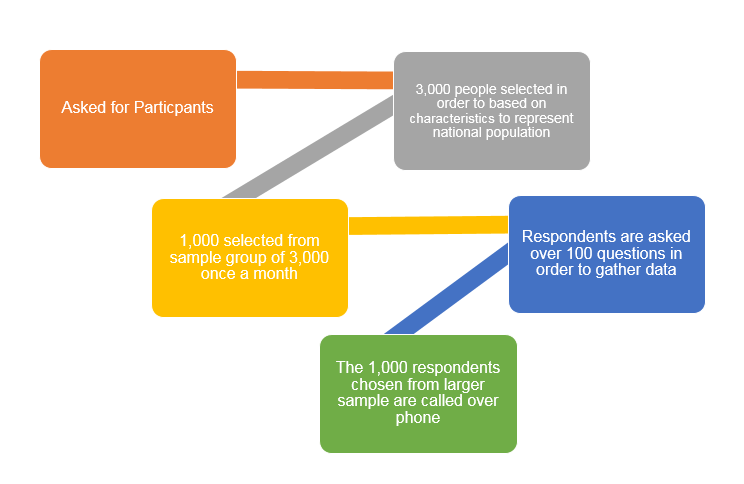 According to Fannie Mae economist, Qiang Cai, while it was known that student debt had some impact on the rate of home ownership before the analysis took place, it was unknown on what level the effect existed.

Student debt can delay the amount of time that it takes an individual to own their home, but the analysis shows that it is still possible.

Renters between the ages of 25 and 44 that have acquired student debt are less likely to buy their next residence by 28 percent when compared to individuals that have not received student loans.

This part of the analysis controlled the sample addressing the following factors:

It should also be mentioned that the study showed those who responded and said that they would rent the next residence they acquired were less likely to state that they were planning to purchase their home than what was reported by individual’s without student debt by 7 percent. 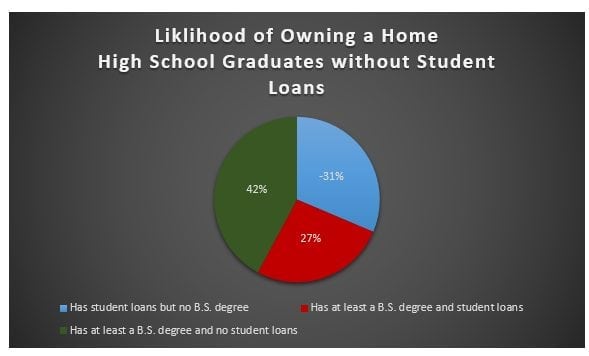 Renters maintain their aspiration to own a home eventually, whether they have student loans or not.

Student loans do seem to delay how long it takes an individual to purchase their first home.

This was shown when analysis was conducted on renters between the ages of 25 and 44.

Tenants that have obtained student loans are less likely to state that they plan to buy a home instead of renting one by 28 percent when compared to individuals that have no student loans.

When an individual graduates with at least a B.S. degree and has no student debt, it does make the process of acquiring ownership of a residence easier.

Strategic planning analyst for Fannie Mae, Sarah Shahdad, stated that residents typically do not have an option on when they will or will not buy their home.

The importance that a college degree holds in relation to the levels of unemployment and income is uniformly recognized by economists.

Males with a college degree typically earn more than $34,969 annually than those without a degree, and for women the number is $23,280 more with a degree than otherwise.

One of the biggest reasons that individuals take out student loans is in order to cover their tuition.

The following shows the cost of tuition and fees for private and public four-year colleges.

This is minus the expenses that students have to cover for food, supplies, books, housing, transportation, and the other expenses of living. 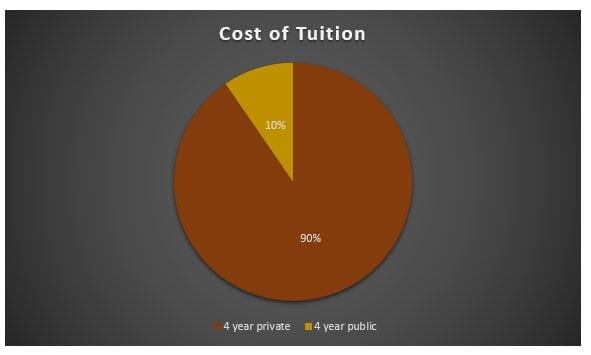 A different study that was conducted on the correlation between owning a home and student debt carried out by the federal reserve took a look at the National Student Clearing House’s data on college attendance in a relationship with credit reports.

The study also shows the gap that exists between owning a home and individuals that complete and do not finish college.

Another Study on Student Debt and Owning a Home

Another study was conducted by Danial R. Ringo, Alvaro A. Mezz, Kamila Sommer, and Shane M. Sherlund  on student debt and the possibility of purchasing a home.

Their study looked at the effect of having debt from student loans had on owning a home.

They used an administrative data set to collect their data.

The data that they obtained was combined with data from the credit bureaus and the histories of college enrollments.

They also looked at the characteristics of each school in association with the amount of time the participant was enrolled in school.

They did make use of other forms of data as well, such as other articles on the same subject.

To be able and identify the effect that student loans were having on the ability to own a home, they used the individual’s total debt and the changes that existed in tuition (for in-state tuition and 4-year public institutions) in the state where the participant resided.

It was found that when student loan debt increased by about ten percent, a 1 to 2 percent drop followed in the rate that the student would be able to purchase a home within five years of obtaining their degree.

The validity tests that were conducted suggested that the results did not account for the conditions of the local economy or the non-rand selection for the sample.

Overall they found that student debt could reduce the probability that an individual would own a home within five years of obtaining their degree.  However, they also found that as the person began to age the negative impact was overthrown by the increase in home ownership probability.

They further found that when student debt grew by ten percent, the cohort was delayed in obtaining home ownership status by around a three-month time span.

The data that was used for this study, however, did not take into account how debt and the possibility of owning a home were affected past the point of five years from obtaining a degree.

It is also stated that individuals receive more income and pay off more of their debt, causing the balance of their debt to drop, as they age.

It is said that they could expect the initial level of debt hindering the possibility of owning a home to decrease the amount of debt decreases.

While the study shows that the amount of student debt a person has can delay their chance of owning a home, it never says that it prevents the opportunity to become a reality.

Furthermore, the authors state that as someone ages and some debt decreases, the likelihood of owning home increases.

[tweet_box design=”default” float=”none”]One study showed that individuals that begin the college process, but do not receive their Bachelor’s degree, were the most negatively affected group when looking at student debt. [/tweet_box]

This group were less likely to own a home by 32 percent when compared with individuals that completed high school, have no student debt at all, and did not obtain a college degree.

40 percent of individuals that have student debt and are within the age group of people 25 to 44 years old fall into the category as mentioned above.

Shahdad further states that individuals who obtain student debt, but are unable to get their degree, are placed in an awkward situation.

She further said that this was because they were forced to take on the additional debt that student loans provide without the benefits of the increased income provided by a four-year degree.

She stated that the pressure from student loans could potentially be eased if more of the individuals that started their quest for a four-year degree were able to obtain that degree.

There is still much more to learn when it comes to the correlation between student debt and an individual being able to acquire the status of home ownership.

Shahdad states that further research could be aimed at addressing how student loans impact an individual purchasing a home when looking at different degree levels.

She further said that the investigation could be conducted on the likelihood of owning a home when a person has student debts and a higher standard of education.

She indicated that there was a need to look at the amount of financial support an individual was receiving by other means.

These means could come from things such as family members, or paying for college with credit cards.

She stated that these factors could impact the ability an individual has to go to college to lower student debt.

She also indicated that this could affect the ability an individual had to obtain a degree and avoid student debt altogether and their ability to be able to afford the down payment needed to purchase a home.

Further studies could also be conducted on the correlation of an individual growing up in poverty, and the likelihood that they will obtain student debt, or be able to purchase their home.

Studies could also look at people in poverty and whether or not the delay that exists between obtaining a degree with student debt and purchasing a home is greater than those who are not in poverty before attending college and acquiring student debt.

An area of interest that could also be researched is the amount to which different levels of payment burdens an individual obtains affect the rate of owning a home.

Most of the participants in the study that were conducted by Fannie Mae obtained repayments for their student debt that equaled around ten percent or less of the overall income they received on a monthly basis.

Shahdad further states that the cost of education is always increasing, and the number of income individuals receives changes continuously.

The Federal Reserve report for the types of outstanding consumer credit lists student debt as one of those types.

The following chart shows where this fell for 2011- the 1st and 2nd quarters of this year: