You are here: Home / US Student Loan Center / Student Loan Consolidation / How the Student Debt Crisis Affects You and the Economy

How the Student Debt Crisis Affects You and the Economy

In today’s economy it seems that financial bailouts have become a favorite policy of the U.S. government. The auto industry, insurance companies, banks, and even the solar industry have been major beneficiaries of Uncle Sam’s generosity.

On top of that, we have the Congress giving out money that this country needs and doesn’t really have to countries like Ukraine and Egypt, instead of taking care of important issues here at home.

This is not a political debate, and we are not trying to say that helping other countries or struggling industries is wrong. But if the government is giving millions of dollars to rescue big companies, and and other countries, why not lend a helping hand to the million of struggling college graduates that are saddled with debt? With a debt so high that surpasses the credit card and auto industry debt.

There has got to be a fiscally responsible way for the government to help all those deserving college graduates just like they helped Wall Street and other big business. We know that president Obama and different senators, like Elizabeth Warren, are proposing different solutions for this problem, and we hope they reach one soon. But why should this be a top priority for the government you may ask? One big reason is the fact that we have millions of underemployed new college graduates struggling with student debt and unable to contribute to the economy. By helping the millions of students get out of this burdensome debt, the country would see an amazing valuable economic effect not only in the housing and auto industry, but in other sectors as well.

The actual situation of student loans and resulting debt is without a doubt eating away the economy.

Recent studies show that among households with student loan debt the average outstanding balance almost reached $30,000 in 2012. That’s not all, almost 7 million of all students borrowing money are delinquent on their payments, by at least 3 months or more. Intensifying the problem is the fact that according to the law student debt cannot be discharged through filing bankruptcies, even though lots of millionaires and billion dollar corporations can file. 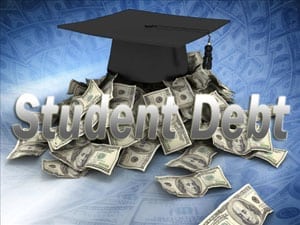 We’ve lost sight of the fact that higher education is not a product but rather both a public good and an investment in our collective future. How are we ever to compete on the global stage in the new, twenty-first-century economy if we’re saddling our best and brightest with mortgage-sized debts just as they’re starting out in life? What most media coverage fails to emphasize is that a well-educated workforce benefits everybody, not just the individuals obtaining the educations in question.

When the housing market crashed, you didn’t need to own a home to be affected by damage it did to the economy. The same can be said for student debt. The effects of this massive drag on the economy can be felt down the line—from auto manufacturers and dealers, to homebuilders and realtors.

If you own a small business, your bottom line is affected by the fact that 40 million Americans simply do not have the disposable income necessary to purchase goods or services. And the problem is only getting worse.

There is not doubt that the student debt has harmful effects that can be felt throughout the economy, and mainly in key sectors like the housing market and the car industry. About 50% of first-time homebuyers are between 25 and 34 years old, a demographic group that is almost 40 million strong, and in spite of this millions of these prospects are not able to qualify for mortgages because of the vast student loan debt weighing down on them.

Only 4% of the 40 million were actually granted mortgage loans in 2012. which means there is a significant number of potential home buyers being locked out of the housing market. When there is less demand in the housing market, the need for heavy equipment, lumber, steel, electrical fixtures, cement and other building materials diminishes, which in turn decreases the industrial sector’s growth.

Moreover, household formation is also highly affected by the student debt crisis. Because they are underneath a heavy cloud of debt a lot of college graduates, who are not qualified to purchase a home, decide to live with their families or friends and delay the choice of getting married and having children.

Which means they will not be buying home appliances, furniture, electronics, carpets, wall decorations, and a long list of good and services that drive the U.S. economy.

The list of lost economic opportunities goes on outside of the housing industry though.

Take those young struggling recent college graduates out of the country’s economic equation, or at least reduce their place in the equation, and you have less demand for new/used cars, entertainment, travel, dining out, and other personal spending.

We hope that the government can soon reach a fair and sensible way to help the millions of students, both young and old, and their families get back on firm financial footing before the debt reaches $2 trillion and continue to affect each one of us in one way or another.