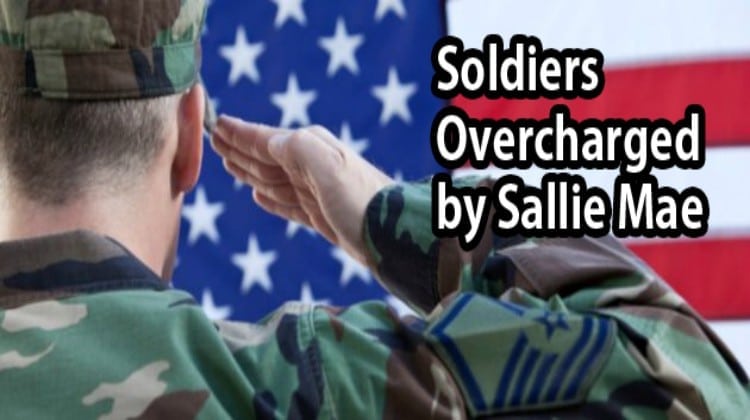 The Huffington Post reported that these revelations could potentially threaten Sallie Mae’s lucrative contract with the Department of Education.

“The allegation also may further embarrass the Education Department, already under fire for lax oversight of student loan companies that are paid by taxpayers, yet are alleged to have repeatedly violated federal rules,” the report said.

Probes into the massive firm, which services federal student loans for 5.8 million borrowers, are being conducted by the Consumer Financial Protection Bureau (CFPB), the Federal Deposit Insurance Corporation (FDIC), and the Justice Department.

Moreover, a few months ago a group of state attorneys announced that they are also investigating Sallie Mae for different violations.

The CFPB received several complaints that applications by soldiers to reduce their interest rates were illegally denied and that they were swamped with such red tape as demands for paperwork to prove they were on active duty.

In a Wednesday news release, Sallie Mae said it is in talks to settle allegations, including whether the firm violated laws banning deceptive practices and discriminatory lending. The company said it has set aside $70 million in anticipation of enforcement actions, but warned that the ultimate cost may be larger.

Back in March Reuters reported that an official from the Obama administration was grilled about the investigations at a Senate hearing, with lawmakers demanding to know why the loan servicing company’s contract had been renewed.

“The contract is black and white — if you violate federal law, you lose your contract,” said Chris Hicks, who leads the Debt-Free Future campaign for Jobs With Justice, a Washington-based nonprofit that has called on Education Secretary Arne Duncan to suspend the contract with Sallie Mae.

“If the Education Department fails to enforce that clause of the contract, they are letting down borrowers, soldiers, and taxpayers. The department needs to take this seriously, because Sallie Mae’s actions are obscene. They’ve betrayed our trust,” Hicks said.