If you haven’t heard by now interest rates on federal student loans will rise!

And now we have an official date for the rise: July 1st.

This is not the first time the cost of student loans has gone up for students, and it will definitely not be the last. Still, experts say, that federal loans remain a good deal. And a far better one than private loans.

So what can you expect from this rise?

First, the rate increase impacts only loans disbursed on or after July 1 of this year. Loans taken before then will not be affected.


For new loans, the rate on undergraduate Stafford loans will climb to a fixed 4.66 percent from 3.86 percent.

On Stafford loans for graduate students, the rate will jump to a fixed 6.21 percent from 5.41 percent.

PLUS loans, which either parents or graduate students can borrow, will rise to a fixed 7.21 percent from 6.41 percent.

So why are the rates changing?

Interest rates are fixed for the life of the loan, but the cost of debt in future years could still go higher.

In 2013, Congress passed legislation that tied federal student loan rates to the 10-year Treasury note, resetting every July 1. Without the new law, rates last year would have doubled from 3.4 percent to 6.8 percent.

But now Treasury rates are rising — and could go higher, pushing up the cost of borrowing for students.

In fact, according to projections by the Congressional Budget Office, student loan rates could reach 7.05 percent by 2018.

“People will think fondly of when the rate on a Stafford loan was only 6.8 percent,” said Mark Kantrowitz, an expert on college financing and publisher of Edvisors, an online resource about financial aid. 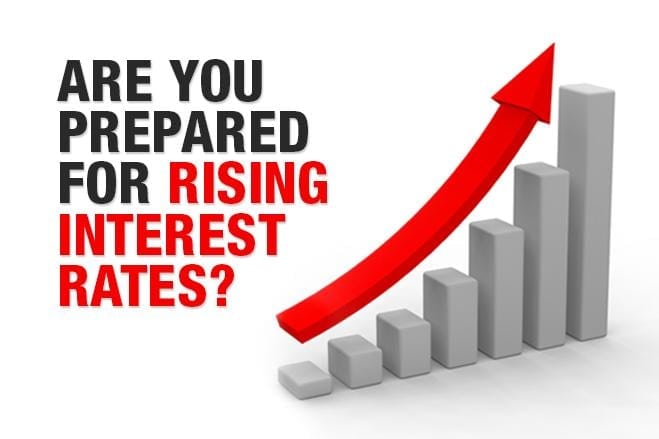 Steeper interest rates mean students will be facing much higher monthly bills once they’re out of school.

In spite of this increase, Kantrowitz says, federal student loans are still the best option for the growing number of borrowing students who need help to pay for college.

In 2012, the latest year for which figures are available, 71 percent of all students graduating from four-year colleges had student loan debt, up from 68 percent in 2008, and 65 percent in 2004, according to The Institute for College Access and Success.

For one, interest rates on federal student loans are capped at 8.25 percent to 10.5 percent, depending on the type of loan.

Also, “You have a range of repayment options and consumer protections that other financing doesn’t provide,” said Lauren Asher, president of TICAS.

Those options include income-based repayment plans, which cap your monthly bill to an affordable percentage of your income, and the ability to defer payments if, say, you lose your job.

Federal student loans may be cheaper than private loan options.

At Sallie Mae, for example, fixed rates for private student loans range from 5.74 percent to 11.85 percent. To get the lower rate you need an excellent credit rating.

In contrast, most federal student loans do not require a credit check.

And this year’s rate jump for federal loans may be manageable.

A freshman who borrows the maximum $5,500 allowed during the 2014-15 school year will see the monthly payment after graduation rise by little more than $2.

The more you borrow, though, the more you’ll feel the pain.

“The amount of debt has a more significant impact on the monthly payment than the change in interest rates,” Kantrowitz said — something to keep in mind if you’re starting a college search this summer and comparing costs.

“You don’t have control over interest rates, but you do over the amount you borrow,” Kantrowitz said.